Yumi, 12 years old: 💖 My impressions about moving to Canada 💖 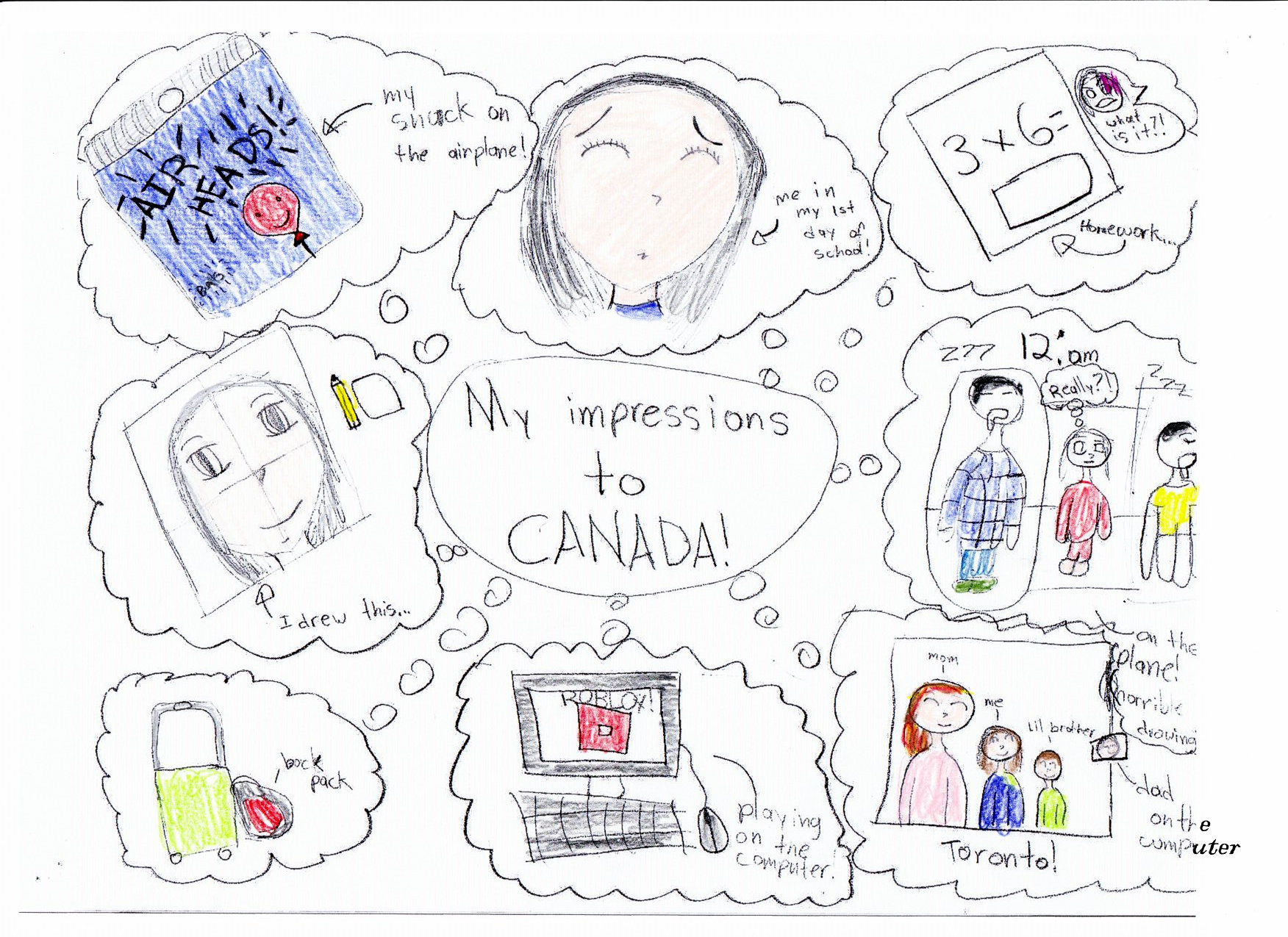 💖 My impressions about moving to Canada 💖

Hello there! My name is Yumi and I am 12 years old. I moved with my parents to Canada when I was 9 and I will share with you my impressions about being an immigrant child.

When my parents told me that we would move to Canada, at first, I got surprised because I just had learned a little English in my school in Brazil. I also felt scared because I didn’t know how things would be in Canada. I just got a little bit excited about the idea of moving because my parents told me that in Canada there is snow during the winter. I love snow, so I was happy about knowing that. I wanted to make a snowman and I got excited about the possibility of doing so. I used to love the movie Frozen, but now I’m older and I don’t really like it anymore.

My mom moved to Canada 40 days before I did. My brother and I stayed in Brazil only with my dad and I got sad because my mom was away. However, we used to talk using Skype and that was helpful because we could communicate with her daily.

I actually noticed this difference because in Canada we can go walking to school by ourselves, whereas in Brazil we could not do so. In Brazil, parents are afraid of having their kids kidnaped if they are alone in the streets.

I got sad when I told my friends that I would move to Canada because I didn’t know if I would be able to see them again. I still miss my friends from Brazil because I like them very much. At school, I used to play with my friends Julia Tiemi, Maria Eduarda, Francesca, and Julia Camilo.

However, I also made good friends in Canada. Their names are Habiba and Nefeli and I play with them at school every day. It is really fun to play with them, but I have an odd feeling that we always play the same game. I don’t like this. The game is called “grounders”. It’s similar to “tag”, but the person is with their eyes closed to try to get the other in the play. Nobody can stay long on the ground so we play the game in a playground. When the person that tries to get the others notices that someone is on the ground, they shout “grounders”, and then the person that is on the ground is “tagged”. It seems easy, but it’s hard. You are with your eyes closed, you can’t see, you may bump into a pole or tag someone that is not playing with you.

I started learning English when I was in kindergarten in Brazil, but in Canada, I had to learn a bit faster so, in my school, I am an English Language Learner (ELL) by taking English Second Language classes (ESL). It was really helpful to learn English a bit faster, 2 times faster than I thought. Once my mom said “circle” wrong by saying circle like saying with an E but I told her the right way to say it. But my brother and I still have to correct her sometimes, and it’s the same with our dad too. (Note for Portuguese speakers: mom was saying “sircol” when the correct pronunciation is closer to “sãrcol”).

The first day of class

My first day of class was weird because I couldn’t speak any English, and I didn’t know what they were talking about. But, then, I learned English. I learned how to ask my teacher to have a drink of water or to go to the bathroom by seeing my friends doing it. That made me feel less nervous to ask my teacher.

When I was still taking English classes, I also started learning French. The results learning English were pretty good. After 1 month of taking English classes, known as ESL, I could say a couple of words; about 3 months since the beginning and I started to say some sentences and phrases; and about 6 months since I’ve arrived, I started to speak a lot of English. Actually, I was only speaking English at that time. The bad and funny thing when you are in the middle of learning a new language is that you forget your first language. It’s important to remember to always keep your first language, this was a life lesson for me. Now, I already know that I can’t forget it.

If you are wondering why you cannot forget your mother language, I will tell you: imagine that you are travelling to your home country, so happy to see your friends and family again. When you get there, and your grandma says “hi” in her own language, you will not know what she is saying. So, I was careful to not forget it, and you should do the same. I forgot some words, but not much, and my dad helped me to say things in my first language, which is Portuguese.

A very important decision in our lives

Now, I am around 3 years learning English, and it’s a really a big stage for me, but I still need to learn it, because I need to learn English on my level now (and I am in the 7th grade, as I said). Well, writing this text counts too, you know.

Moving to Canada was hard for me, but it was successful. It was a really big journey for me, and I loved the experience that I had: I loved going to new places, new restaurants, new entertainment, and making lots of new friends. I feel so bad that I left my Brazilian friends behind me, but I know one day I will be so happy because I will see them again. I just wished they came here to visit me: it will be a lot of money, but it will worth it.

I can’t believe I went so far from being new here to being to that advanced level, I couldn’t be prouder and more thankful to my parents for making that decision. I will always remember in my heart that I did this, that I reached my goal for making friends, for not being worried all the time, like coming out of my little shell and show for being myself.

How to play “grounders”